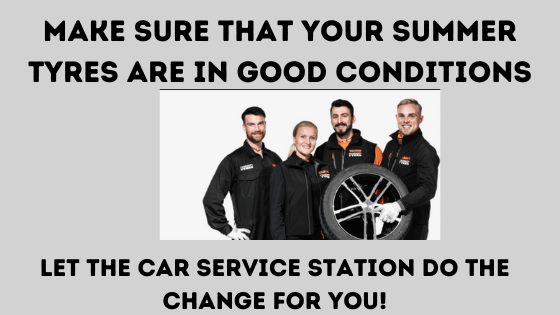 For the countries that have to switch every year between summer and winter tyres and then back to summer tyres, you might wonder what actually differentiates them. They both look quite similar, so why can’t you use the same tyre for the whole year. Here we will review some of the differences between the tyres and also look at the all-season tyres that can be used all-year round.

The summers are characterized by warm weather and if you include spring and part of autumn, you basically have plus degrees. You don’t have snow, ice or slush, so you basically have dry roads or then you have wet roads from the either summer rain or the spring/autumn rain. Winter on the other hand is basically the total opposite. You have basically minus degrees and most of the times you will have snow, ice or slush present. The days are shorter, so you have less visibility due to the darkness.

For winter tyres, when they are used during the warm summer temperatures, they will become too soft. They become almost glued to the road surface at high temperatures; this causes them to wear out much faster than intended. It isn’t really dangerous to drive with winter tyres during the summer, but it is not good to wear out your tyres and you don’t get the maximum performance out of the tyres. This is why you can wait a bit longer with changing to summer tyres, but don’t overdo it, just to it for safety until you are sure that the winter temperature will not return.

The tread design is then the second big differentiator of the tyres. With winter tyres you can have studs integrated into the tread and for non-studded they rely on unique tread design. The tread has different design to be able to manage snow and slush and prevent slushplaning. For non-studded tyres you will have grip particles added that will create a sandpaper like surface. For summer tyres, the tread is more optimized for precision and control and the ability to prevent aquaplaning.

For more information regarding summer and winter tyres, visit: https://www.nokiantyres.com/